I love studying and teaching about Jesus’ parables in the Gospels – that is one of my favorite class sessions in the NT intro course I teach. I am also fascinated by the history of interpretation of the parables. So, I was overjoyed to see David B. Gowler’s new book The Parables after Jesus: Their Imaginative Receptions across Two Millennia (Baker, 2017). Because this book covers more than fifty case studies in reception – most of them deeply engaging and insightful – I will talk about the book over several posts. Here we will briefly cover the introduction and first main chapter.

Why a book on the “afterlives” of the parables of Jesus? Gowler seems to be intrigued by the impact of these tales and riddles on Christians and other readers of the gospels throughout the centuries. But he also mentions how attentiveness to reception helps us to be aware of our own blindspots and the disadvantages of having just one human tradition or perspective. The more engagement from people outside of our era and locations/culture, the more our

vision is expanded to what may be going on in the parable. In his own words, Gowler says that “One of the goals of this book is to help readers better understand the importance of context for interpreters’ responses to Jesus’ parables” (9).

He uses the Prodigal Son parable as a test-case, noting that some (from their own vantage point) argue that the point is ethical, others focus on ethnicity (elder brother = Israel, younger = Gentiles), and others still believe it talks about different kinds of Christians. Gowler is not directly interested in settling on the “right” interpretation. He sees the attentiveness to these many interpretations instructive regarding the act of learning itself.

Chapter 1: The Afterlives of Jesus’ Parables in Antiquity (to c. 550 CE)

In this era, Gowler is selective, but covers figures like Irenaeus, Clement, Tertullian, Origen, Chrysostom, Augustine, and the under-appreciated Macrina the Younger. Gowler also looks at Christian a

rtwork from this period which depicts parable images (though admitted there is not very much). It is difficult to give any sweeping summary to patterns of reception and use in this period, but Gowler does note that allegorization and blending of biblical passages and images was popular.

So far, I appreciate Gowler’s concise summaries of each figure or artist’s interpretation, and he includes artwork as able and relevant. Next up – the middle ages… 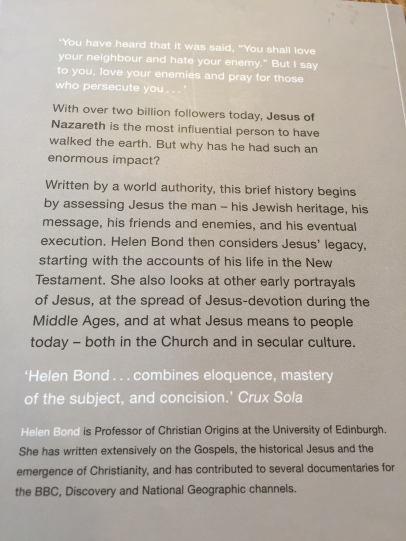 Congrats to Helen Bond on Jesus: A Very Brief History. SPCK contacted me a few months back to endorse the book. I was very happy to do it, but sad they used the blog title only (Crux Sola) and not my name! Still, Bond is an excellent Jesus scholar and gifted writer and teacher. SPCK should also be credited for a beautiful book and cover design. For less than $7 this is a steal!

I found a nice little interview with Richard Hays in Books & Culture (from Nov/Dec 2016) about his career and what motivated some of his writings. I love getting a bit of context about how he was trailblazing and what he set out to accomplish and why. Enjoy!

I was doing a bit of research on 1-2 Thess and came across an essay by J.C. Hurd called “Thoughts Preliminary to Writing a Commentary on 1 & 2 Thessalonians” (in The Earlier Letters of Paul – and Other Studies [Peter Lang, 1998]). I did not recall a commentary by Hurd, so this was a bit intriguing. The essay itself is from 1977. In the essay he mentions his ongoing work on the Anchor Bible commentary on 1-2 Thess. But in a 1998 footnote at the beginning of the essay (added when this essay was collected), Hurd offers this frank footnote comment: “Alas, this commentary does not exist. I was unable to complete the work in the assigned time, and Doubleday re-assigned the responsibility.” Well, Anchor eventually published Malherbe’s outstanding commentary in 2000, but sad not to have Hurd’s work available! Also, this ranks as one of my favorite footnotes of all time.

Feminist biblical interpretation is not a brand new discipline or method, it has been around for several decades at least. But I am impressed with its growth in the last few years. In 2012 we saw the publication of the Handbook of Women Biblical Interpreters (Baker). Just the other day I received in my mailbox a book called Women in the Story of Jesus: The Gospels through the Eyes of Nineteenth-Century Female Biblical Interpreters (ed. M. Ann Taylor and H.E. Weird; Eerdmans, 2016).

I would also like to point out a fantastic introduction to feminist interpretation by Barbara Reid called Wisdom’s Feast: An Invitation to Feminist Interpretation of the Scriptures (Eerdmans, 2016). I know that when I was in seminary, I simply assumed all feminist work on Scripture picked apart and deconstructed Scripture with a hermeneutic of rejection. I now know that I was misguided – mostly out of ignorance. Reid’s work is a rich introduction that I wish I had in seminary. One of the most insightful ways that I have been told to think about feminist interpretation is this: seeing women where they are demeaned, suppressed, or left out and seeking to show them equal dignity and respect. This has been very transformative for my work in Scripture and apparently I too am a feminist! I am going to find a way to require my students to read Wisdom’s Feast.

That brings me to another important new book/series. Liturgical Press (/Glazier Press)

has launched a great new series called the “Wisdom Commentary” which studies various biblical texts from a feministic perspective. I enjoyed the editorial preface; here is one excerpt

I ordered the 1-2 Thess volume because that is where my research is focused nowadays, this volume written by Florence Gillman, Mary Ann Beavis, and HyeRan Kim-Cragg. Here is what they wrote about their approach to these letters:

My approach to feminist analysis…is interested in the world of people behind the text of 1 Thess, that is, the subject location underlying the biblical document. This includes learning primarily about women, their experiences, and their concerns that have usually been overlooked, submerged, ignored, and even disvalued not only in ancient male writer’s andocentric worldviews but also in later interpreters’ explications of the text. (9)

It has been suggested that the church in Thessalonica in the first century was male-only. Gillman (et al) obviously takes interest in this theory and (in my humble opinion) raises important questions about its basis of evidence, and also  considers evidence to the contrary (see 31-33).

I am delighted to see feminist biblical interpretation thrive, and I am hopeful that this Wisdom series will be recognized for its contribution to biblical scholarship overall. 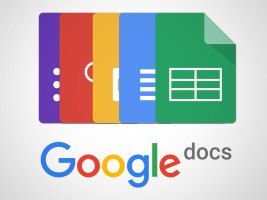 This year I have made a huge change to how I do research storage and writing. I am in the process of ending my use of Microsoft Word and fully adopting Google Docs. Secondly, I am transferring all of my storage from Dropbox to Google Drive. The storage issue really is for two reasons. First, George Fox has purchased for faculty endless storage in Google Drive, so I am taking full advantage of that – but I regularly back-up everything onto an external hard drive anyway. Perhaps the biggest reason I am putting everything into Google Drive is that I find the search feature more powerful and accurate within Google drive than from my “Finder” on my Mac. One of the biggest headaches I have is trying locate a file I misplaced, or trying to figure where I took notes on something. Finder is unhelpful about half to time, but Google seems to locate it right away.

What about Google docs? At Portland Seminary, we use Google Docs for all collaborative documents and projects, and it is super easy to use and also for document sharing. Perhaps I will run into formatting issues in the future, but I already have those kinds of issues with Word. In any case, it is easy to convert a Google Doc to Word.

Has anyone else made this move? Are you still a believer?

I have long admired Michael Goheen’s work and my students have raved about his book A Light to the Nations (which I used as a textbook a handful of years ago). Recently I spent part of my spring break teaching at Goheen’s institute called The Missional Training Center. It is an impressive educational context that focuses on forming pastors and Christian leaders in a mentorship setting. I shared with his students some of my reflections on bringing the theology of the Gospel of John to life in the church.

Speaking of Goheen’s work, I recently read the excellent work he edited called Reading the Bible Missionally (Eerdmans). It boasts a remarkable list of contributors including Bauckham on mission as hermeneutic, Chris Wright on reading the OT missionally, NT Wright on reading the NT missionally, Joel Green on James, and Dean Flemming on Colossians. I recall a few years ago a respected NT scholar saying that he has stopped talking about “missional” because it is too faddish. I think that is a mistake – I think we can fight for retaining and clarifying the best of how this helps us read Scripture and think and act Christianly. This book is a great opportunity to reflect on where the discussion has come in the last few decades, and it is also not a bad starting place for those students who are just entering the discussion. I admire Goheen’s passion and single-mindedness. In the book, Goheen has a nice chapter on preaching, and another one on theological education. Check it out.