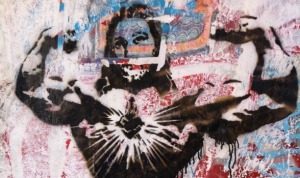 Over the past three weeks, I have been blogging my way through a new course that I’m currently team-teaching with a colleague from my department. The course is called, “Jesus in Contemporary Culture.” Here are the first three installments if you need to catch up (1, 2, 3). On Monday our class finally finished watching The Passion of the Christ. Our past two sessions–Wednesday and today–have served as our “wrap up” before moving on to our next film, The Last Temptation of Christ.

During our Wednesday class, one of the students commented on Jesus’ “composure” just before and during the flogging scene. That scene in particular seemed to stick with students more than any other part of the film. The student was interested in how Jesus was able to remain so restrained in the face of cruelty, mockery, and suffering. As I was watching the Passion again this time, it hit me that there are some striking similarities between the torture Jesus undergoes and the final scene from Braveheart (another Mel Gibson film). In the scene in question (embedded below), William Wallace (played by Gibson) has been captured by the English authorities and is mocked and tortured relentlessly before being “drawn and quartered.” Just like the Passion, William Wallace’s last moments unfold before a bloodthirsty crowd that calls for his death. Just like the Passion, there are continued cutaways to Wallace’s followers who stand disguised in the crowd and stoically watch his death. Just like the Passion, Wallace displays both strength and defiance in the face of cruelty. And, just like the brief hint at resurrection at the very end of the Passion, there is a brief battle scene at the end of Braveheart that reveals the ultimate victory brought by Wallace’s death. In light of these parallels, it’s hard to deny the influence Gibson’s Christianity had on his shooting of Braveheart. (For what it’s worth, I think Simon Joseph’s recent blog post on Jesus in film is helpful and has some points of contact with my recent discussion here).

Today’s session was devoted to looking at Jesus and masculinity. We looked at Fight Club churches, some quotes about the “masculine Jesus” from prominent evangelicals like John Piper and Mark Driscoll, and other phenomena that emphasize a muscular Christianity rooted in a “punch-you-in-the-face” type of Jesus. There is little doubt that this conception of Jesus in contemporary Western culture influenced Gibson’s Christ who “takes his beating like a man.” Though we sought to problematize this understanding of Jesus and related conceptions of Christianity, many of our students indicated that these ideas were quite familiar to them.

I’m really looking forward to next week where we look at Willem Dafoe’s Jesus who is anything but “composed” and “restrained.” I’m hoping the contrast will spark some good discussion. 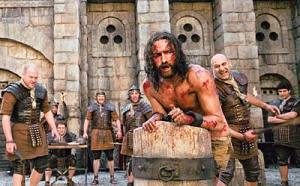 For the past two class days (Wed/Fri), students in my “Jesus in Contemporary Culture” class have been watching Mel Gibson’s The Passion of the Christ. This is the first of six movies we will be watching together throughout the semester. Since our class sessions are only 50 minutes long, there wasn’t enough time during our Wednesday session to reach the point in the movie where Jesus begins to suffer in earnest. However, today students were treated to nearly 40 minutes of in-your-face, extremely graphic, painstakingly slow suffering. The violence perpetrated against Jesus in this movie can only be described as over the top.

I haven’t seen this film in several years and a number of thoughts came to mind as I was watching today: (1) The presentation of Jesus’ suffering is rather unrealistic. Any human would have been long dead after the nearly 14-minute scourging Jesus receives in the film. At one point, Jesus is beaten to the ground, then stands up only to be beaten to the ground again. (2) The extremely graphic nature  of Jesus’ suffering in the film is (intentionally) emotionally manipulative. In a class of 30 students, about half of the class had some visible reaction to how the beating was depicted–this includes male and female students. Several students were wiping tears from their eyes and at least one student kept her head down for the entire scene, refusing to watch the scourging. My colleague has described the violence as “heavy-handed.” I think that’s an apt description. (3) There is a definite cultural connection (at least here in the US) between the suffering of Jesus and popular presentations of masculinity we see in things like Fight Church and elsewhere, where the underlying assertion is that Jesus took his suffering “like a man” (and presumably Christian men should follow this example). This is a topic we’ll be looking at in two weeks. I don’t think either of us remembered that the scourging scene included Jesus being beaten to the ground, only to stand up and be beaten down once again. (4) This movie is dripping with anti-semitism / anti-Judaism. At every turn the bloodthirsty Jewish leaders are pushing for Jesus’ death while the largely sympathetic Roman characters are reluctant to make this happen.

I am interested to see where our discussion takes us after we finish watching the film next week. I am also interested in your insights. In particular, I would love to hear from those of you who either (1) have taught a course in which this film (or other Jesus films) were used; (2) have a background in film; or (3) can share further insights about the Passion that I may be overlooking.